The creation of the building

The Church of San Bevignate was built on the site of an ancient “fullonica” (laundry) of Roman Age, whose ruins, under the flooring, are also visitable. In the surrounding area, since 1243, the Templars owned a little church dedicated to San Gerolamo. The Abbey of San Giustino de Arno, San Gerolamo and the complex of San Bevignate constituted actually a single “precettoria” (preceptory).

The Church was founded in 1256 on a proposal of the influential Templar friar Bonvicino, born in Assisi and cubicolarius (close collaborator) of four Popes. It was built in accordance with the Bishop and the Municipality of Perugia, and was dedicated to San Bevignate.

San Bevignate was an hermit particularly worshipped by the people of  Perugia, who had  lived some decades before and that the Templars, the Bishop and the Municipality itself, tried, on various occasion, to have canonized. This whish explains as well the imposing dimensions of the edifice, thought with the civic cult of San Bevignate in view, whose corpse lays under the altar. Cult that, with the ensuing almsgiving, would have benefitted also the Order and its projects beyond the sea.

The austere architecture, in sandstone, of a single cross vaulted nave, recalls gothic forms of Cistercian inspiration and reminds edifices built in the same years in the Perugia area, but it is at the same time consistent (a part from the dimensions, usually more modest) with the architectures of the Temple Order.

The residential part was at the beginning limited to a tower structure close to the church (later bell tower), later enlarged in a convent wing.

The Fresco decoration is characterized by a first phase (about 1265-70) in which local painters, in a popular and communicative style, made: a curtain with false ashlars and symbolic elements, common to various Templar sites (crosses, nine stars alluding to the nine founders of the Order, floral pattern); on the tribune, Christological scenes, the Last Judgment, the Last Supper and some Saints and civic cults, among Bevignate and friar Raniero Fasani, Hermit from Perugia, probably connected to the same Bevignate, and the starter of the penitential movement of the “Flagellanti” (Flagellants) in 1260; in the inner part of the façade, in three superimposed bands, stories of the Templar enterprises, either on a battlefield or during boat crossings toward the Holy Land 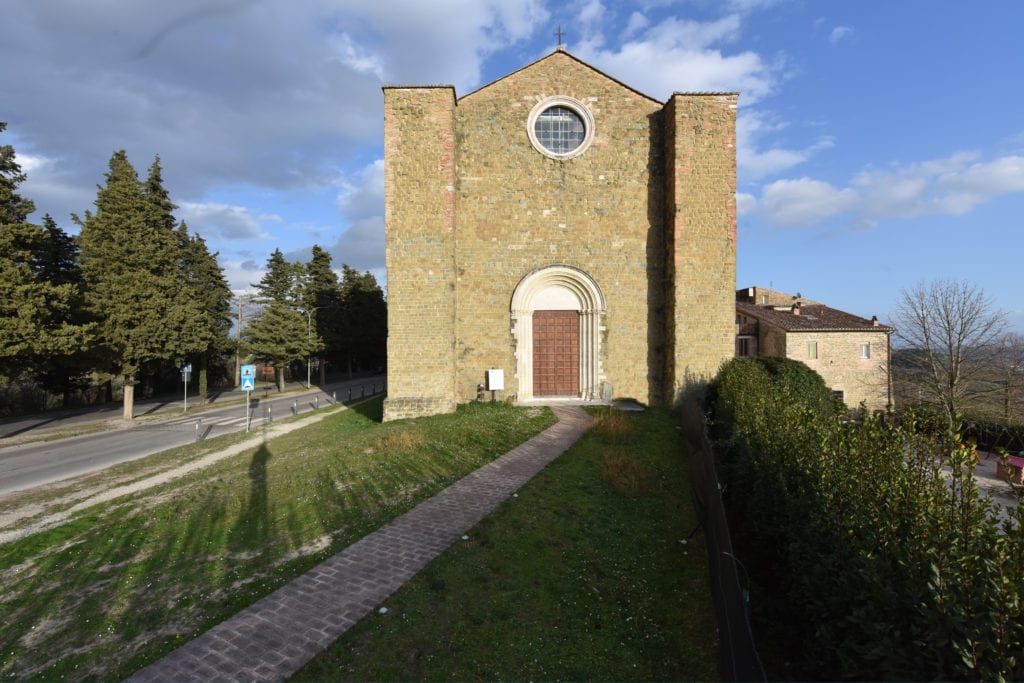 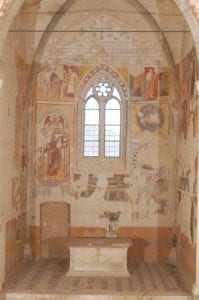 A second decorative phase, in which the figures of the 12 Apostles, with roman byzantine characteristics, were painted along the walls by different painters, can be traced back to 1280 or a little later. Probably the series of the Apostles was painted when in the “precettoria” was resident the French Guillaume Charnier, documented as present in Perugia in 1283, a very important member of the Order and already “ostiario” of Pope Niccolò III (1277 – 1280). In this period, probably, part of the an altar array was a refined triptych on board with a Madonna with Child and stories of the Life of Christ (also known as Perugia or Marzolini Triptych, today visible at the Galleria Nazionale of Umbria).

Edifice and decorative apparatus together constitute one of the most complete and best preserved witnesses of the History of the Knights of the Temple. (by Mirko Santanicchia)

Entrance with fee; wheelchair accessible
bookshop, toilets, parking lot
when open, free of charge, available: audio guides (in Italian and English), information materials, guide in Braille; the operators present can answer questions and give brief deepening free of charge on the history of the museum.

Visit the Templar Complex of San Bevignate and Perugia