Colloquium “From East to West. The Knights Templar from the origins to the end of the 12th century” in Troyes, November 3-5, 2021

In January 1120, in Naplus, barons and prelates of the Holy Land gathered around the king of Jerusalem, Baldwin II, and the patriarch of the city conquered twenty years earlier by the Latins, gave substance to the brotherhood of knights recently organized around Hugues de Payns. In the months that followed, the Temple was officially born with the adoption of an Augustinian-inspired form of life that was replaced by its own rule at the Council of Troyes in January 1129.

Recognized by the Catholic Church thanks to the support of Bernard of Clairvaux and transformed into a religious order, the first in history to declare itself military, the new foundation then embarked on an active phase of recruitment in the West intended to gather the armed and financial support necessary for the mission of struggle and protection of the Latins that had been entrusted to it.

Initially, the account of the origins of the Order of the Temple was based on oral traditions later recorded by William of Tyre, Ernoul and Jacques de Vitry. If the progressive structuring of the “proto-templars” has been partly brought to light by recent research, the colloquium wishes, on the occasion of the ninth centenary of the Council of Naplus, to explore once again the file of the birth of the Temple.

To this end, four lines of thought have been privileged: the writing of the memory of the origins of the Temple between the 12th and 21st centuries through chronological, historiographical and Masonic traditions; the personalities who carried or accompanied the birth of the Order (Hugues de Payns and his first companions, the hierosolomytic royalty, the princely recruits and the barons of the Holy Land) ; the position of the Church before the institutionalization of this new military and religious organization, particularly through the prism of the ideals of reform and the debates that accompanied the evolution of the “Augustinian consortium”; the reception of the Knights Templar, finally, through the Bernardine approach and the perception of the friars in the East by local actors, essentially Christians and Muslims, as well as the study of the archaeological remains of the first phase of the Templar presence in the 12th century. 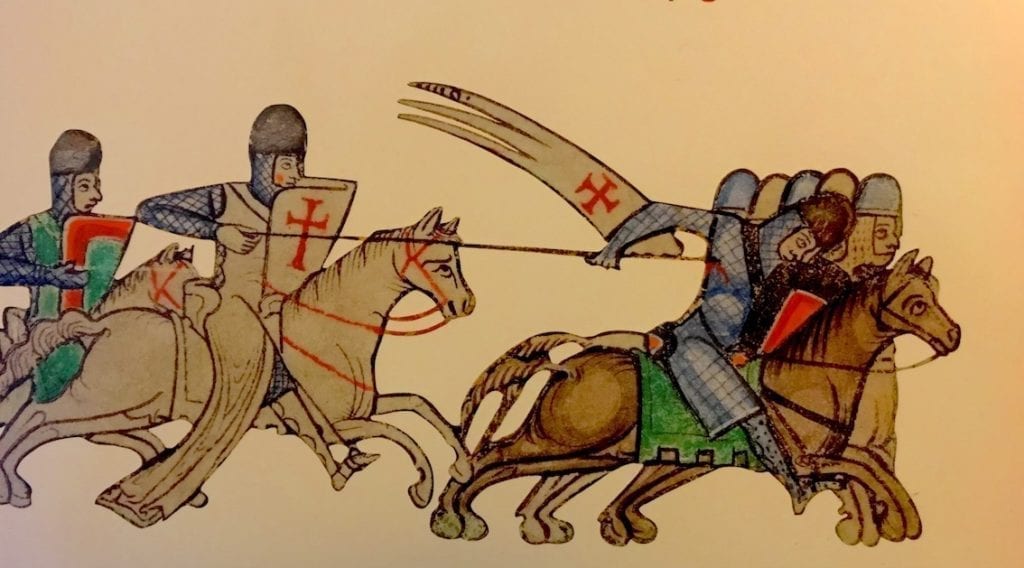 This international colloquium is organized by the Département de l’Aube, in partnership with the National Archives, as part of the scientific programming of the European Templars Route. It will be held from 18 to 20 November 2020 at the Troyes congress center.

9:30am Opening of the colloquium by Mrs. Anabela Freitas, President of the Templar Route European Federation

9:45am Inaugural lecture by Jean Mesqui, Doctor of Letters: The fortifications of the Order of the Temple in the 12th century: state of knowledge

First Session – Writing the Origins of the Order of the Temple

10:25am Representations of the origins of the Temple in the chronicle of William of Tyre – Pierre-Vincent Claverie
10:50am Exchanges
11:00am Break
11:15am The memory of Hugues de Payns from the 12th to the 21st century – Thierry Leroy
11:40am “The Knights Templar are among us”: the story of a legend – Pierre Mollier (Director of the Library-Archives-Museum/Studies and Masonic Research of the Grand Orient of France).
12:05am At the origins of the Order of the Temple: history, writing and historiography – Philippe Josserand (University of Nantes)
12:30am Exchanges
12:45am Lunch break

Second session – In the cradle of the Temple: the actors of a birth

2:15pm The Templars and the misfortune of the kingdom. When the Order of the Temple came – perhaps – close to dissolution – Florian Besson (University of Paris 4)
2:40pm Hugues de Payns and the “proto-templars” – Simonetta Cerrini
3:05pm The Tower of the Strait and the beginnings of the Order of the Temple – François Gilet
3:30pm Exchanges
3:45pm Break
4:00pm Hugues de Champagne and the Orient: from the Crusade to the Order of the Temple – Arnaud Baudin (LAMOP/UMR 8589)
4:25pm Foulques V, from West to East: the networks of the Count of Anjou – Bruno Lemesle (University of Burgundy)
4:50pm The baronnage of the Holy Land in the mirror of its seals – Marie-Adélaïde Nielen (National Archives)
5:15 Exchanges

9:30am-10:30am. Visit of the commandery of Avalleur
12:00-1:00pm. Visit of the Abbey of Clairvaux
1:00pm Lunch break
2:30pm The notion of order of origins at the Lateran IV Council – Florent Cygler (University of Nantes)
2:55pm Bishops and the ecclesiastical reform of the 11th-12th centuries – Alexis Grélois (University of Rouen-Normandy, GRHis EA 3831)
3:20pm The pilgrimage to the Holy Land in the 11th-12th centuries – Sonia Merli
3:45pm The Other Augustinian Consortium: Reformed Clerical Life in Crusader Jerusalem and Beyond – Wolf Zöller (University of Heidelberg)
4:10pm Exchanges
4:20pm Break
4:30pm The other Augustinian consortium II. The association of the Hospital and the Holy Sepulchre in the first southern charters – Damien Carraz (University of Clermont-Ferrand) and Yoan Mattalia (University of Toulouse)
5:00pm Processes of institutionalisation in the Order of the Temple – Jochen Schenk (University of Glasgow)
5:25pm The expansion of the Temple Order on German soil in the 12th century – Karl Borchardt (University of Würzburg)
5:50pm The expansion of the Temple in Portugal in the 12th century – Luís Filipe Oliveira (Universidade do Algarve)
6:15pm Exchanges

Fourth session – In the mirror of contemporaries and archaeology

9am Bernard of Clairvaux and the Order of the Temple – Annie Noblesse-Rocher (University of Strasbourg)
9:25am The reception of the ordo novus of the Temple – Helen Nicholson (Cardiff University)
9:50am Crossed views of non-Latin Christians on the Templars in the Eastern Mediterranean – Marie-Anna Chevalier (University of Montpellier)
10:15am Exchanges
10:30am Break
10:55am The Muslim perception of the Templars – Abbès Zouache (CNRS) (to be confirmed)
11:20am Between foundation and construction: chronology tests on some commanderies in the North-East quarter of France – Vincent Marchaisseau (Inrap, UMR 6298 ARTEHIS), Cédric Moulis (University of Lorraine, ES 1132, HISCANT-MA) and Cédric Roms (Inrap, UMR 8589 LaMOP)
11:45am The archaeological site of ‘Atlit – Vardit Shotten-Hallel (Israel Antiquities Authority)
12:10am Exchanges
12:30am Conclusions – Julien Théry (Lyon 2 University)
1pm End of the conference